Zumar Industries developed on a foundation of quality, integrity, and family values. The unwavering entrepreneurial spirit of our founder, Paul Lemcke, served as the driving force to build a company that could thrive through the ages and be passed down the generations of his family—and it all started with the common search for the American Dream. 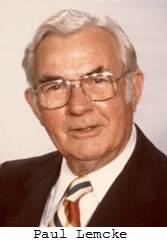 Paul Lemcke came to the United States from Europe at age 18, leaving behind his family to pursue greater opportunities in America. Unfortunately, he was met with a grueling challenge everyone was facing at the time—The Great Depression. While doing what he could to make ends meet, Mr. Lemcke soon found himself dealing in plywood—manufacturing cabinet parts and wooden boxes, including boxes for shipping bottles of Coca-Cola. After experiencing many years of success, fate would soon take a turn after a supplier basically gave a piece of equipment to Mr. Lemcke, attaching it to one of his plywood orders. It was a 3-foot-by-3-foot heat-vacuum applicator. This was one of the original pieces of equipment used to adhere reflective sheeting to various substrates. At the time, using reflective sheeting to make signs was very new, so Mr. Lemcke kept the business of making signs as more of a side project. However, as reflective sheeting became the main material for creating signs, Mr. Lemcke’s side project became more lucrative than the plywood company. In 1951, Mr. Lemcke made the life-changing decision to take full advantage of this newfound industry, and formally established Traffic Control Signs Company (TCSC) in Tacoma, Washington with three to four employees.

Mr. Lemcke faded out of the plywood business and focused solely on growing TCSC. In 1967, his son, Pete, began working full-time at the company—working every position available from screen cleaning to accounting. Pete was cut much from the same cloth as Paul, both sharing strong character qualities of hard work, perseverance, and great leadership. It would not take long before young Pete was ready to take on TCSC himself and expand it beyond Paul’s dreams.

Under Pete’s leadership beginning in 1976, TCSC would take on considerably more employees, as well as products and services, making TCSC a local go-to source for traffic-safety supplies. One of his greatest achievements came with expansion in Los Angeles County after acquiring the reputable traffic sign manufacturing company, “Zumar Industries, Inc.,” in 1982. At the time, sign companies shared very similar names and were often confused or thought to be interchangeable. It was on this argument that Pete would also rename our organization Zumar Industries, Inc. We are often asked what the name Zumar is or stands for. In fact, it is the last name of Charlie Zumar. Charlie was a respected businessperson in Los Angeles for many years before selling the company to Pete.

After experiencing many years of success between the two locations, Zumar took another step forward by opening a third location in Arizona. Upon having a long, flourishing career, Pete transitioned ownership to our current leaders Mark Giese and Ben Lemcke. Together, the two have propelled Zumar into the twenty-first century—leveraging advancements in technology, machinery, and business operations to ensure customers receive the highest-quality products, on-time delivery, and the best customer service with every order.

Though all businesses encounter ebbs and flows of change, Zumar Industries, Inc. continues to thrive due in large part to one valuable, unwavering component—our people! Our employees remain the most valuable asset at Zumar. We perform to a set of standards committed to appreciating each other, providing superior performance, and keeping you—our customer—at the core of everything we do.